Plenty of candidates will want to make the claim that you should support them because they are the only candidate that can deliver victory in the general election.  In some cases, they are right.  These claims range from the safer and more polite “I give us the best chance to win!” to the riskier and more dismissive “I am the ONLY candidate who can win!”  The first claim is pretty standard campaign language while the second tends to offend the other candidates who don’t appreciate being called sure losers.  That is why if you are ever going to make the “ONLY” claim, you really need to be able to make a strong case for it.

Scott Gessler is Colorado’s Attorney General, a pretty solid conservative from what I’ve been able to determine, and I know some great Colorado conservatives who back him.  He is running in the GOP primary for Governor for the opportunity to take on Democrat incumbent John Hickenlooper.  In fairness, I prefer Tom Tancredo for the GOP nod because I’ve known him for nearly 25 years and he has been a consistent soldier for the cause for far longer than that. Still, like with Mitt Romney in 2012 and John McCain in 2008, “electability” is one of Gessler’s pitch points.  Where he screwed up in obvious fashion was right after the most recent campaign finance reports were filed.  Gessler’s pitch is below. 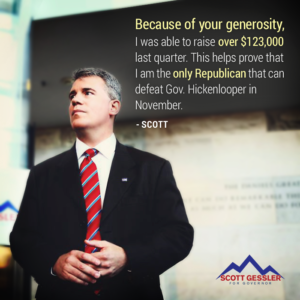 Gessler is pumped up about his numbers.  He raised $123,000 in the last quarter, thus helping to prove that he is the only Republican who can beat Hickenlooper.  Or that is his claim anyway.  Which is where it all falls about for him.

Essentially, the only way Gessler’s claim isn’t total bunk is if he believes that the ability to raise more than $123,000 is a bad thing, and that Tancredo’s fundraising success makes him a worse candidate.  Which, of course, no one will ever believe.  “Tom Tancredo can’t win, he has too much money!” will never appear in a Gessler ad.

Gessler isn’t likely to give up his sales pitch that he’s the only guy who can win the race, but in the future he needs to support that claim with something not so easily disproven.