In the rush to claim victory for Democrats, many pundits are missing that the most likely effect of the House takeover will not be any major policy victories for the left, but rather a long-term benefit to President Trump and his 2020 re-election effort.

Republicans paying a price for failing to keep many of their promises is an accurate storyline, although the great irony is that the House moved quite a few promises along only to see them perish in the Senate.  But the Senate gets to confirm the judges, and judges have been perhaps Trump’s greatest victories in his first two years, so the Senate Republicans got to enjoy voter appreciation and gains while House Republicans paid the price.

January will bring a different dynamic to Washington D.C.   It will still be a very dysfunctional place, but Republicans will no longer be held responsible for all of it.  There will likely be a honeymoon period of 4-6 months where large issues like infrastructure will see bi-partisan support as everyone attempts to prove they deserve to have a hand in governing, but very soon the Democratic primary for President will begin and the hard pull left will make compromise almost impossible for key Congressional Democrats. 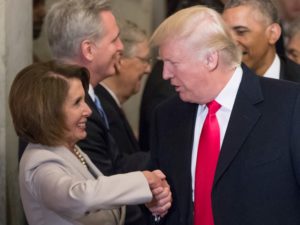 Most importantly for Trump, he will have Pelosi back as a foil and, much as Clinton benefitted from being able to run against Newt Gingrich and the GOP House, Trump will benefit from being able to point out who is blocking passage of his promises without having to point fingers at Republican leadership.

Every great movie needs a villain and Trump 2016 had Hillary Clinton.  Trump 2017 and 2018 really didn’t have a villain and you could tell the difference it made.  Looking ahead, Trump 2020 will have whoever the Democrats nominate.  In the meantime, Trump 2019 has been blessed with the return of one of the least popular Democrats in the country, and you can bet that when the honeymoon ends, you’ll be hearing an awful lot about Nancy Pelosi and the Democratic House majority from the White House.